In 2005, Thomas Le Claire, art dealer in Hamburg, revealed in its catalog of acquisitions (Katalog no. XVII) a most rare and previously unknown piece of art. It consists of an anonymous 16th century watercolor (gouache) painting on watermarked paper depicting a celestial phenomenon (named "comet") seen in 1527 along with a hand-written descriptive text in the lower part. 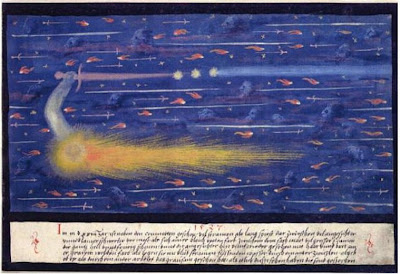 Pictorial depictions of celestial phenomena were not unusual for that time frame, we know of many which were printed along with the massive popular broadsides or in more luxurious books such as, among others, Lycosthenes' Prodigiorum ac Ostentorum (1557), or Cornelius Gemma's De naturae divinis characterismis (1575). These printed depictions however were often of poor quality and reproduced from rough woodcuts.
What really stands out with the present document is not only the fact that it is original, but more importantly hand-painted, and in colors.

The watermark on the paper, representing a beetle on a small shield, was used to determine the approximative date of execution of the painting (circa 1550) and offers a hint as to the identity of the anonymous painter (Swabia, Bavaria, possibly Augsburg).

We can thus determine that the painting was not executed immediately after the event but about 25 years later. The existence of another painting (probably by the same anonymous hand), similar in execution and depicting a monstrous birth in 1513 (held by the Staatsgalerie in Stuttgart, inv. no. C 92/4097) hints toward the idea that the present painting was part of a series or album of prodigious phenomena of which only two sheets, including this one, are known today.

Various 16th century authors have mentioned a particularly spectacular celestial phenomenon in 1527 clearly visible over western Germany. Most of them talk of a "comet" but do not agree on the month: some place its appearance on August 11, others on October or December 11. All of them, except Abraham Rockenbach in his De cometis... (1598, 1602), say that the phenomenon appeared only once and lasted for less than two hours. Rockenbach however says that it was visible for many days, an hour and a half each day. Being a later account, general consensus has always considered Rockenbach as mistaken.

Creutzer's text is the basis from which all other later accounts derived, and among them, the handwritten text which accompanies the present hand-painting. The latter reads as such: 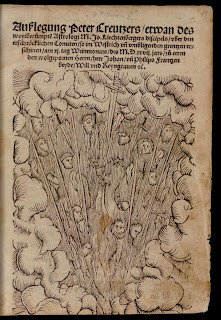 Creutzer's booklet contains on its front-page a woodcut image illustrating his most pictorial description of the phenomenon [see ill.]. This illustration has become quite famous, and found its way in Lycosthenes' Prodigiorum ac Ostentorum... (1557), Boaistuau's Histoires prodigieuses... (1560), Ambroise Paré's Des monstres... (1573, 1585), Cornelius Gemma's De naturae divinis... (1575), and all the way to Camille Flammarion in the 19th century.

Even though the phenomenon has been labeled as a comet ever since its description by Creutzer, many scholars today tend to consider it as an auroral display, mostly because of its highly picturesque description and depiction (spears, figures, blood, etc.).

The present painting offers a different view of the event. While there are no firm elements to support the idea that the painting was based on anything else than Creutzer's original description, its representation clearly differs from the other sources known to this day, in that it is closer to the representation of a comet-like phenomenon than that of an auroral display.

We have seen earlier that all sources, except A. Rockenbach, have described the phenomenon as of single and short duration, which is mostly the basis, along with the pictorial description, of its identification as an aurora borealis. Close examination of these sources however have shown that they all used the same single source, namely Creutzer's booklet, which is also betrayed by the evident reuse of the same illustration (with very minor modifications) over time.

With the discovery of this new and exceptional document, it is now possible to ponder whether the identification as an aurora should still stand and whether more consideration should be given to Abraham Rockenbach's account which describes a longer-term phenomenon, and therefore hinting toward a more "comet-like" phenomenon.